The Cambria County Juvenile Detention Center provides temporary, 24-hour maximum secure care for juveniles between the ages of 10 and 18 years of age.  The Detention Facility, 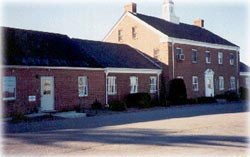 with intensive supervision and structured programming, attempts to minimize the negative effects of confinement.  The Court places alleged-to-be delinquent or adjudicated delinquents in detention when there is a clear and convincing need to protect the community.  Juvenile Detention provides more than mere custody.  Quality programming is offered to each youth.  The program offers youth structure and clear expectations, and age-appropriate activities.

The Detention Center operates by creating legitimate, alternative pathways to adulthood through equal access to services that are least intrusive, culturally sensitive and consistent with the highest professional standards.  The facility operates in a safe and secure manner that provides protection for the youth, staff and community.  It preserves children’s individual rights and dignity and encourages adolescent development.  Programming emphasizes positive reinforcement techniques and approaches.

Recreational needs are provided through a structured physical fitness program.  Outdoor recreation in a secured area is permitted weather- permitting.  Interns and Occupational Therapists enhance the quality of care offered to youth.

The Detention Center is licensed by the Department of Public Welfare to house a maximum of 12 residents.  The facility is co-educational and serves nineteen surrounding counties.  Meals are provided in house; the facility follows the School Lunch Program.  The Department of Agriculture, Department of Health and Department of Education inspect and license this program.

The Congress of the United States changed legislature in juvenile’s detention. The Juvenile Act of 1973stated juveniles who could not return to their homes were to be held in a separate facility away from adult criminal offenders; thus, the juvenile detention facility was established. Cambria County built the present facility in 1964. An addition of a gymnasium and administration offices were added by obtaining a federal grant in 1982. The juvenile facility (before 1964) was located in a huge mansion type home located in Lovell Park, Ebensburg. This two story house with white pillars on a large southern-type porch had bars on the second story windows. The bars were the only indication that juveniles were housed in the facility. A married couple ran the home while raising their own children among the detainees.

The Administrator’s apartment, which was located above the current detention center, was vacant in 1986. The apartment was occupied by the Juvenile Probation offices. Children and Youth occupied the space in 1988 through 1990. Renovation started in 1993 to establish a seven bed Shelter Care Facility. The Emergency Shelter Care Facility officially opened on May 31st of 1993. Today, there is an addition that houses 17 sheltercare youth. Juvenile Court occupies the left wing of the facility.

*The facility complies with all statues and regulations that prohibit discrimination on the basis of race, color, religious creed, ancestry, sex, handicap, age or national origin.